While Rome and Tuscany remain destinations of choice for foodies, some may find the rampant tourism ever-so-slightly disheartening. Described by some as the ‘rising star’ of Southern Italy, Puglia is a haven for those seeking excitement at a relaxed pace. The region’s food is also some of the best Italy has to offer. Craving a true Italian culinary experience? This guide will showcase the best of Puglia’s food, from signature dishes to landmark restaurants and hotels.

What can visitors to Puglia expect?

Situated on the sun-soaked heel of Italy, Puglia has Italy’s longest coastline. Bordered by the Adriatic and Ionian sea, Puglia’s pristine beaches and crystal-clear waters are nothing short of delightful.

Travel further inward and you will be met with acres of farmland. Thanks to Puglia’s sunny climate, as well as its rich and fertile soil, many of these farms have thrived for generations. It is for this reason that Puglia is commonly called the ‘garden of Italy’. With such perfect growing conditions, those in search of ‘farm to table’ dining will be spoiled for choice in Puglia.

Puglia is home to many picturesque towns steeped in ancient history. Although it is known as the ‘Tuscany of the South’, the town of Lecce has a beauty that transcends geographical borders. The town is known for its extravagant Baroque architecture, with a host of wine bars and quaint restaurants along its medieval streets.

Visitors to Southern Italy will have a hard time missing a strong Greek influence and Puglia is no exception. The region is home to sprawling vineyards and olive groves – Puglia produces 23% of Europe’s olive oil. Therefore, many meals will be served rather liberally with lashings of extra virgin olive oil!

What are some common ingredients in Pugliese cooking?

A historically poor region, meat has never been the centerpiece of local cuisine. Instead, visitors should expect hearty portions of vegetables – particularly zucchini, aubergine, and peppers. Of course, these fresh vegetables have been marinated, grilled and fried using local olive oil. Stuffed vegetables make frequent appearances in Puglia’s antipasti – with neighboring farms producing exquisite mozzarella and burrata cheese. One word of advice – those looking for small plates to graze on may find themselves having to share one portion of antipasti.

Vegetables are not the only reward of Puglia’s fertile land. Made using local durum wheat, we’re not exaggerating when we say that Puglia’s bread is world-famous. The town of Altamura boasts one of the only loaves of bread in the world that have been granted Protection of Destination of Origin (PDO) status. This bread is baked in wooden ovens and made using a recipe that remains pretty much unchanged since the Middle Ages. Those who venture to the port city of Bari would do well to try its renowned focaccia. The traditional recipe calls for tomatoes, olives, and oregano. However, visitors are also likely to encounter focaccia stuffed with Provolone cheese and mortadella ham.

When it comes to pasta, orecchiette is Puglia’s shape of choice. Deriving from the Italian term for ‘little ears’, nonnas have been carefully making orecchiette by hand on the streets of Bari since the 12th century. Made using durum wheat and water, the orecchiette is then left to dry out in the open air, before being bought by the kilo by keen locals and tourists alike. We also recommend trying some freshly-made cavatelli, small clam-shaped shells that effectively scoop up their accompanying sauce, which is more often than not a classic, rich tomato.

What are some of Puglia’s signature dishes?

Italians keep their pasta simple yet highly effective. When combined well, a mere handful of ingredients can make a bolder statement than the most eclectic pasta dish. A primary example of this is orecchiette con cima di rapa or ‘orecchiette with broccoli rabe’. The star of the dish is the sharp and pungent broccoli rabe, tempered with garlic, olive oil and a tasteful sprinkling of pecorino cheese. If you wish to fully adhere to the Pugliese tradition, you should pair this meal with an aromatic Primitivo or Aglianico wine.

While we may have sparked an appetite for fresh Pugliese bread, we haven’t touched upon its accompaniments. Traditionally considered a peasant’s dish, fave e cicoria combines fava beans and chicory into a satisfying spread. Once again, we see a masterful balance of warm and bitter flavors, not to mention a nod to an Egyptian influence in classic Mediterranean cooking. While it may go without saying at this point, the final touch to fave e cicoria is a satisfying glug of olive oil.

Historically speaking, while meat has never featured too heavily in Pugliese cuisine, meat dishes would traditionally be prepared in times of celebration. A standout example is braciole alla barese, tender rolls of meat stuffed with herbs, garlic, and cheese. These rolls are steeped in sugo della domenica – which translates to English as ‘Sunday sauce’. This is a slow-cooked meat and tomato sauce, usually served on Sundays and national holidays.

Often you will find sugo della domenica served over two courses. First, the meat-infused tomato sauce is separated from the braciole. Then it is served over orecchiette, the fresh pasta soaking up the meat’s rugged flavors. The braciole will then be eaten as a secondo or main course. Those with a voracious appetite can also opt to have the two courses combined into a particularly rich and hearty dish.

Although meat is easy to avoid in Puglia, this shouldn’t be taken as a comment on its quality. In Puglia’s marketplaces, butchers offer locally-reared lamb, beef and horsemeat. This can often be cooked fresh to order on an open wood-fired grill, known as a rosticceria. As the aromas waft along the market stalls, you’ll be forgiven for experiencing a sudden craving for succulent, tender lamb.

How can visitors to Puglia gain an authentic culinary experience?

Those on the lookout for sophisticated ‘fine’ dining won’t encounter many options in Puglia. Instead, visitors should expect hearty, rustic meals and traditional flavors. One guaranteed way to have authentic culinary experience is to book a stay in a masseria.

Masserie are farmhouses and country houses that have been renovated for tourists. Those interested in masserias can opt for a charming bed and breakfast, or even a five-star hotel. Many of the masserie lie at the heart of working farms. A typical lunchtime offers freshly-pressed olive oil, herb-infused burrata cheeses and vegetables picked straight from the garden. The masserie are also a delight architecturally-speaking – within the white stucco walls, you’ll find influences from Spanish, Greek and Moorish design.

Those seeking both authenticity and luxury should make a play for the Masseria Trapana. This 16th-century farmhouse has been restored into a plush hotel, ten minutes away from the sparkling Adriatic coast. Nestled within hectares of olive groves, orange and lemon trees, the Masseria Trapana has all the mainstays of a tranquil getaway, from yoga classes and games to a sizable swimming pool.

We also strongly advise staying in a masseria if you’re a keen wine-drinker. In fact, Puglia is the second-largest wine-producing region in Italy. In Crispiano, just an hour’s drive from Bari International Airport lies the Masseria Amastuola Wine Resort. Situated amongst acres of olive trees and vineyards, this ancient manor has been renovated with a modern, minimal eye. The wine is flowing all year round, be it from the vineyard or the cellar. Masseria Amastuola specializes in rich and full-bodied reds. Their organic Primitivo has garnered over 17 national and international awards. However, those wishing to book a stay must do so in the Summer months as the winery’s accommodation is closed between November and March.

In July, Puglia has been known to reach temperatures of up to 100°F. Visitors and residents alike flock to beachside restaurants, bars, and delis. There, you can expect simple and satisfying dishes, prepared using freshly-caught seafood. We recommend Porto Ghiacciolo. This intimate oasis is nestled in a coastal corner a stone’s throw away from Monopoli. Spend a languid afternoon in tranquil waters then venture up to one of the local restaurants, where you’ll be served sauteed mussels and ice-cold beer. One word of advice – Porto Ghiacciolo is not the best-kept secret, so you may want to arrive relatively early!

When it comes to dining in Puglia, the focus is on time-honored ingredients and techniques. There isn’t that demand for ‘contemporary takes’ on local cuisine, which can at times feel fussy and artificial. Instead, chefs and restaurateurs offer no-frills dishes that have barely changed since when their grandparents were cooking them. A great example of this is Le Zie Trattoria in Lecce. This restaurant serves rustic meals that showcase Puglia’s local produce. The ambiance is permeated with a familial warmth (the restaurant is rather aptly known by locals as La Zia or ‘The Aunt’.) It’s no wonder that visitors liken it to their nonna’s kitchen. Our favorite dish is the ciceri e tria – combining earthy chickpeas with fried pasta for a compelling mix of flavors and textures.

To conclude, this historic coastal region flies somewhat under the radar of foodies and travelers alike. This results in a destination that is equal parts unspoiled and unpretentious. ‘Authenticity’ is the defining word when it comes to Puglia’s food – freshly grown, simply prepared and bursting with flavor. Puglia brings Italian food back to its roots and serves it in a way you’ve never experienced before.

Alex Chenery-Howes writes for Pasta Evangelists, a British company specializing in Italian fresh pasta. His main area of interest is authentic Italian recipes and culinary traditions, as well as the role of food in Italian culture. Alex is passionate about helping keen travelers discover new parts of Italy, and enjoy some fantastic food along the way. One Day in Rome: Three Meals and an Aperitivo

Only have one day in Rome? Here's where to find authentic local food, even when [...] Rome Like a Local: Shop, Cook, and Eat in the Eternal City Best Pasta in Rome: Unmissable Dishes and Where to Find Them

Our top recommendations for the best pasta in Rome. Rome is a haven for foodies [...] The Bagno Vignoni Hotel of Your Dreams: Adler Thermae Toscana

The Adler Thermae Toscana is the Bagno Vignoni hotel of your dreams...especially if your dreams [...] The Essential Guide to Eataly Rome

Eataly Rome Guide with essential information including how to get there, opening hours, shopping, restaurants, [...] When it comes to food and drink, every culture has its rules. And Rome is [...] The Best Food Tour in the World is in Rome 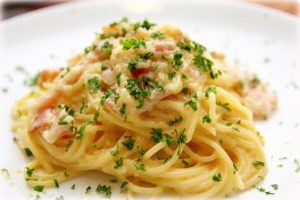 Sitting on a park bench in Villa Borghese watching a puppet show while eating a [...]

One thought on “The Ultimate Food Lover’s Guide to Puglia: What to Eat and Where to Find It”